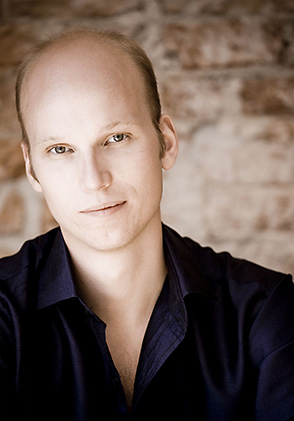 Erik Bosgraaf is generally considered to be one of the world’s most virtuosic recorder players, and certainly the most adventurous. Moreover, he is an inspiring conductor. To Erik, his instrument is an inexhaustible source of inspiration, with endless possibilities. He improvises, plays jazz, utilizes electronics and likes working with people in other areas of artistic endeavour such as cinematography. His repertoire extends from medieval music to Vivaldi’s Four Seasons to tomorrow’s music. For Erik there is no fundamental difference between historical and contemporary repertoire. He is of the opinion that ‘early music is always new’. As a soloist he is regularly invited to lead the orchestra himself. If not playing the recorder, he leads from the harpsichord or – in classical and later repertoire for chamber orchestra –  conducts from the front.

As a soloist, Erik has worked with leading orchestras all over the world. He made his USA debut at the Dallas Symphony Orchestra under Jaap van Zweden, who immediately invited him to his other orchestra, the Hong Kong Philharmonic, telling him: ‘There you can lead the orchestra yourself’ (which Erik did, to great acclaim). He has also worked with the Dutch Radio Philharmonic, Melbourne Symphony Orchestra, the Netherlands Chamber Orchestra, the Orchestra of the Hungarian Radio, the Residentie Orchestra The Hague, the Helsinki Baroque Orchestra, and the Dortmunder Philharmoniker, among others. Frans Brüggen invited him to perform in Bach’s Cantata BWV 106 (Actus tragicus) at the Concertgebouw.

Around a hundred pieces have been composed for Erik Bosgraaf, among which are twenty concertos. Dutch composer Willem Jeths wrote a ‘Mahlerian’ recorder concerto that was premiered in the main auditorium of the Amsterdam Concertgebouw with the Dutch Radio Philharmonic Orchestra conducted by Markus Stenz; the live recording was released on CD by Challenge Classics. In 2011 Pierre Boulez, impressed by Erik’s artistry, gave him personal permission to arrange the clarinet composition Dialogue de l’ombre double for recorder. The world premiere of this ’tour de force’ took place in the main auditorium of the Amsterdam Concertgebouw; the CD appeared in 2015. Fratres by Arvo Pärt: in 2019 Erik premiered his own version with the National Estonian Philharmonic in Tallinn.

Erik Bosgraaf’s 2006 recording (3 CD’s) of Der Fluyten Lust-hof by Jacob van Eyck set a new standard and led to his international breakthrough. Since then, he has recorded more than twenty CD’s such as the complete sonatas of Handel, Telemann and Van Wassenaer (with Francesco Corti, harpsichord), concertos by Telemann and Vivaldi, his own arrangements of Bach concertos, and several more (see the discography). He recorded ‘comprovisations’ with laptop artist Jorrit Tamminga , which was released in combination with the Boulez. His version of Vivaldi’s Four Seasons has also appeared on vinyl.

Erik has made most of his concerto recordings with his Ensemble Cordevento, which also regularly accompanies him on stage. The groups appears in various guises, depending on the repertoire. ‘Corde e Vento’ is Italian and means ‘strings and winds’. The ensemble originated as a trio, still in existence, with Izhar Elias (guitar) and Alessandro Pianu (harpsichord and organ). As a trio, Cordevento focuses on music from around 1700 and earlier. In 2012 they recorded the successful CD La Monarcha, with music from the Spanish territories (Brilliant Classics). Both as a trio and as a full baroque band, Cordevento plays on copies of historical instruments. The ensemble has performed in Berlin, Utrecht, Barcelona, Modena, Moscow, Madrid, Saint Petersburg, Sofia, Hong Kong and Seoul.

The first fruits of Erik’s extensive collaboration with Dutch film makers Paul and Menno de Nooijer were to be seen on the DVD Big Eye. Their latest production is a breathtaking and poetic multimedia version of The Four Seasons by Vivaldi, with film, animation, live projection and exciting soundscapes. Erik has also contributed to the sound tracks of several films directed by Werner Herzog, together with cellist and composer Ernst Reijseger.

Erik is a visiting professor at the Cracow Music Academy, Poland, and gives masterclasses all over the world. He also taught the famous recorder class of the Conservatorium van Amsterdam, where he studied himself.

In 2011 Erik Bosgraaf received the Nederlandse Muziekprijs, the most important classical music prize in The Netherlands. It is awarded by the Dutch state, on average, less than once a year, Erik being the first and only recorder player to receive it since the prize was introduced in 1981. Furthermore, he has received the Borletti-Buitoni Trust Award (2009) and the Northern Dutch music prize Het Gouden Viooltje (2012). In the 2011/12 season he was invited by the European Concert Hall Organisation (ECHO) to do an international tour as part of the Rising Stars programme, having been nominated by the Amsterdam Concertgebouw and BOZAR in Brussels.

Bookings available for the upcoming seasons